Generally we can’t tell when one season ends and the next season starts. Certainly there is an overlap, but for the most part it’s not very obvious. But there are two instances during the year when two seasons collide head-on, and it becomes apparent to even the casual observer. These two times are in the early spring, and again in the late fall. Snow is the common denominator in these instances and it makes us very aware that there is no straight line in the change of seasons… and for the nature photographer it can be a boon. 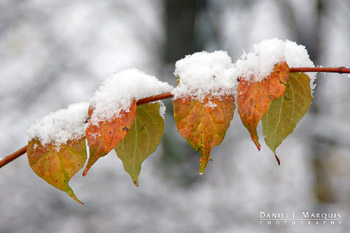 When an early snowfall hits the landscape in late autumn we have a very visual indication of two seasons colliding; Colorful leaves of autumn still clinging to the trees and shrubs that gave them live, and the winter snow that is trying to take that life away, as it inevitably will. This juxtaposition of life and death in the natural world can lend itself to some compelling photos. If you’ve read my earlier blogs you know that colors and shapes catch my eye. And often the colors and shapes present contrasts with each other. And contrast is what these particular images are all about. Some of them are contrasts in colors, some in shapes. But they are all contrasts between one season and the next; between what was and what is to come; between life and death.

Early snow on maple leaves still clinging to the tree

Contrast in an image creates a visual tension, and it is precisely this visual tension that makes an image interesting, or even compelling, to look at.

Usually when we have these instances of an early spring- or late autumn- snowfall the effect is very fleeting, because the day is usually warm enough to melt the snow away quickly. So we have to move quickly to capture images that define the phenomenon. Indeed, while I was taking these photos I had snow falling on my head as it was melting from the leaves above me. And I won’t get another chance to shoot such images again this year, as most of the leaves from the trees in these photos were gone the next day…. But there is always next spring, when a late winter/early spring snow will cover some early blooming flowers. I can’t wait. 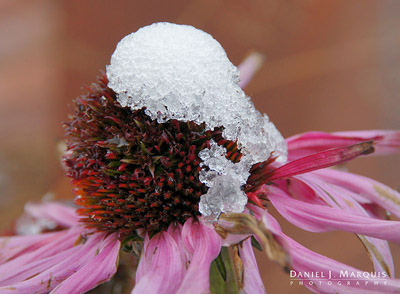