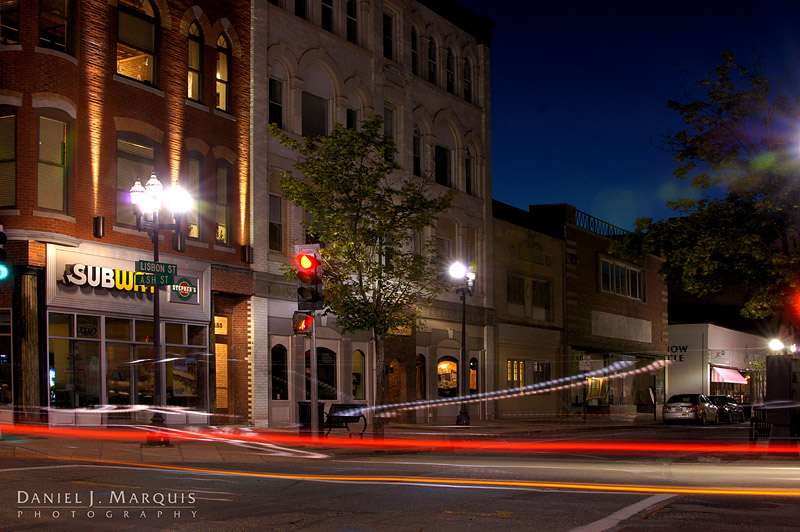 A night on the town; That term conjures up images of drinks and laughter with friends. And while my evening both started and finished that way, this story is about the hour or so in between that was spent in the company of a camera.

I tend to think of myself as a nature photographer. Indeed, that’s how I cut my photographic teeth. However, I sort of accidentally found that there was a good following images of the city in which I live. And beyond that, I also found that I personally enjoyed showing off what this city has to offer. And without a doubt, the best time to highlight a city’s beauty is at night; or more specifically, at dusk. Dusk is that time that lasts for about a half hour after the sun goes down. It’s starting to get dark, so the city’s various lights are coming on. And this is what makes dusk photos so intriguing. All the different color temperatures of lights lend different colors to the image. Long exposures create light trails from passing cars. And you can begin to see colors and reflections in windows that just weren’t there during the daylight. 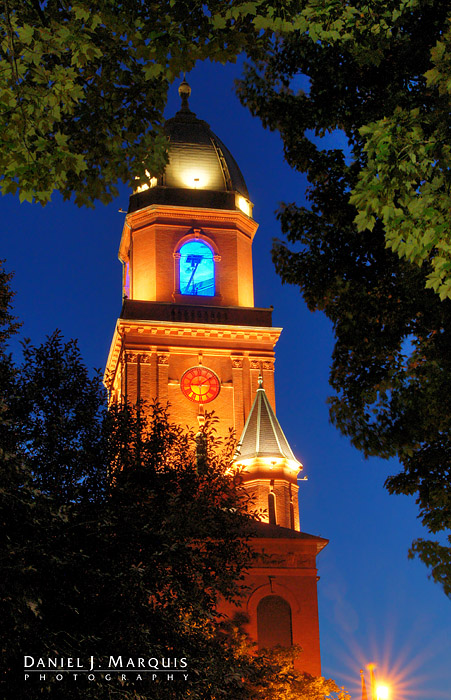 Lewiston City Hall at dusk as seen from Kennedy Park

The other reason to photograph the city at dusk rather than when it becomes totally dark is that the deep cobalt blue of the shy records beautifully, and creates exquisite backdrops for the buildings. The sky becomes a deeper blue as it gets later, naturally. Also, the blue will be deeper if you are shooting away from the direction of the sun, since the western sky has more lightening effect from the sun that has already dipped below the horizon.

In addition to the aesthetic aspect, a deep blue sky as opposed to a black one creates less of a contrast between the deep sky and the any lights in the image. This makes it much easier to get a correct exposure in the camera.

Another aspect of photographing in the city after sundown is an unintended side effect. It seems walking around the downtown at night with a camera and tripod makes people want to talk to you. I met several people in the shot time I was out; some on the street, some in the park. One couple saw me shooting on the sidewalk and engaged me in a discussion about a “new” film camera they had just bought. They asked for advice and help with their new equipment. Unfortunately, being a film camera, I wasn’t much help, but I encouraged them to persue the hobby, even if it meant buying an inexpensive digital model. 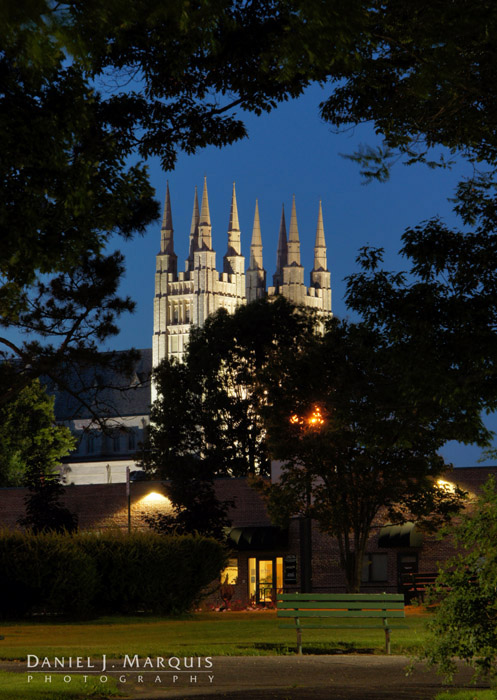 SS. Peter and Paul Basilica at dusk as seen from Kennedy Park

Several people stopped to ask what I was photographing, and when I pointed to the lit up city hall, or the lighted spires of the Basilica, they always agreed that it was a beautiful sight. I was asked if I was shooting for the newspaper more than once, and a young Solmali boy asked if I was the paparrazzi, taking pictures for Hollywood. The camera just seems to bring out friendliness in people.

When I’m shooting in the downtown, especially at night, I find it important to not just look for and shoot the obvious subjects. Of course the beautiful City Hall simply beckons to have its photo taken. Heck, I could probably do a whole book on the beauty of its architecture. But right across the street are the windows of the library. Looking up at them reveals some interesting reflections of the lighted City Hall. Window reflections always make interesting photos, and  the colors these windows were reflecting were simply a photo waiting to happen. If I hadn’t looked up I wouldn’t have seen them. Now the task was to find the best spot to get the best image. After crossing the intersection a couple of times, all the while keeping an eye out for traffic, it turned out the best spot was right where I was when I first saw the image. It’s important not to just take the first shot you see, but sometimes it’s the best one. 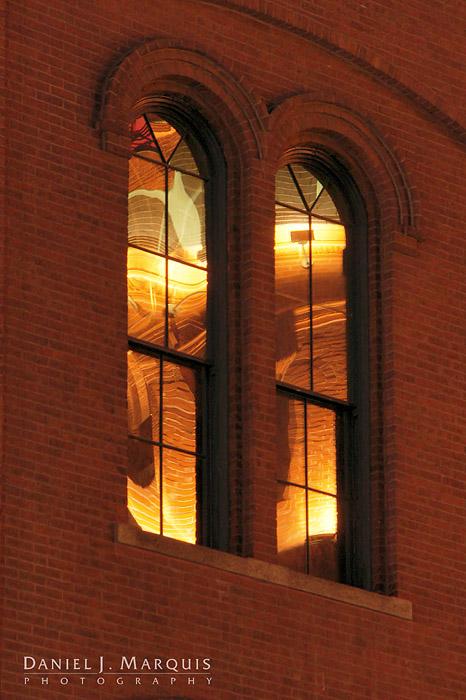 So, after about an hour or so, I eventually made my way back to Fuel Restaurant and Lyceum Gallery where my wife and friends were carrying on with our usual Friday night frivolities and lively discussions. I’m not sure if they even knew I was gone. It’s a fun and inspiring place, filled with art and artists; a place I’m happy to call my “Cheers”; and a place I am happy and honored to share my work. Stop in some Friday evening and have a drink and a laugh and some great conversation… we might even talk about photography. 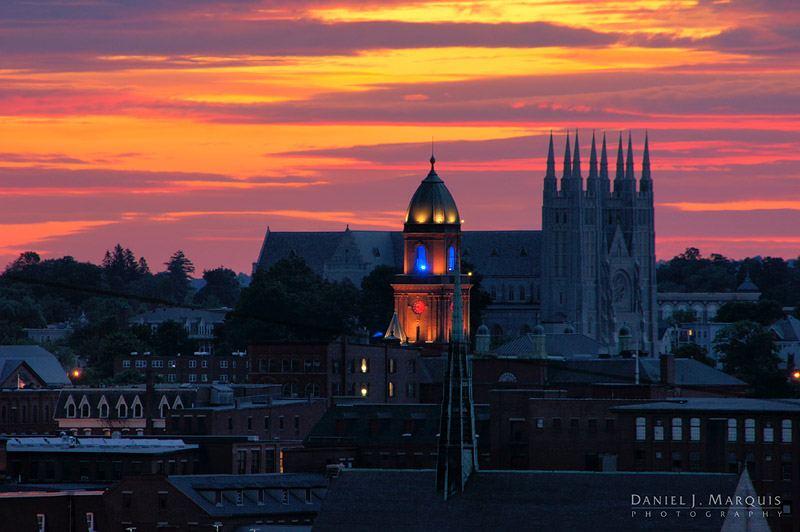 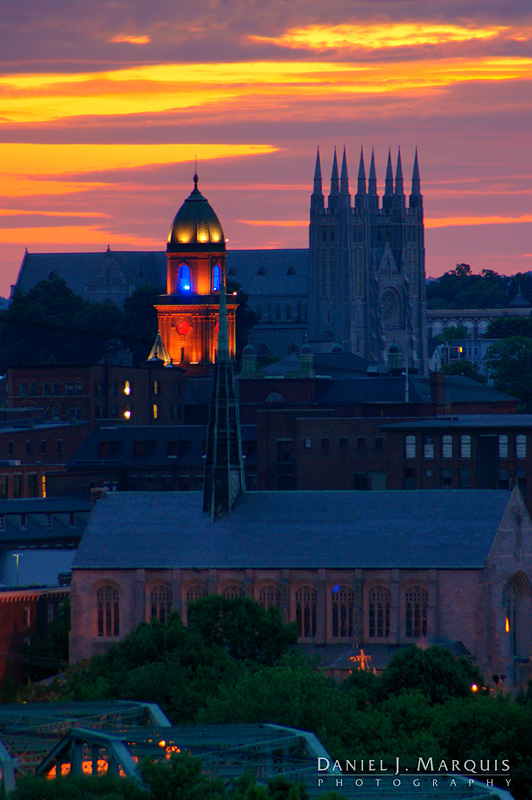